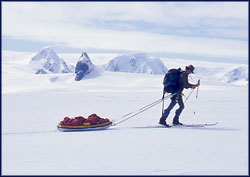 Milton Sams
Born in Sydney, and addicted to adventure all his life, Milton has been at the top of over 250 glaciated mountains in New Zealand, Nepal, Antarctica and the Andes of South America. He has worked as a trekking, cross-country skiing and mountaineering guide in Peru, Bolivia, Chile, Argentina and the Antarctic Peninsula for the last 30 years. In 1989 he lead the Social Climbers expedition that gained entry in the Guinness Book of Records for "the highest black tie lunch party in the world" held on the summit of Peru's highest peak, Huascaran, at 6,780m.

Andrew Powell
Andrew has been closely associated with the "outdoors" for the best part of his life. As a young lad he was keen to explore the wilderness areas of New South Wales by means of bush walking. He then focused his energies on rock climbing where he has been responsible for several first ascents. He can frequently be found climbing up in the Blue Mountains of NSW or doing an extended trip down to Mt Arapiles (Vic) when time allows. He has in more recent years been drawn to the world of snow and ice. Andrew has pursued his mountaineering passion extensively in New Zealand's Southern Alps as well as in the South American Andes including Peru, Bolivia as well as Patagonia and Tierra del Fuego. He has also lead groups mountaineering and cross country skiing in Antarctica. Andrews's enthusiasm is matched by his ability

Jeremy Kenny
Raised on the beautiful south coast of NSW in Australia Jerry has been an adventurer since the time he could walk. This robust young mountain guide had already spent three seasons guiding skiing and climbing in the mountains of Patagonia, Tierra del Fuego and The Antarctic Peninsula, all before the age of twenty-three. Jerry dedicates his strength in the mountains and incredible fitness to enthusiastically helping as many people as he can to experience the lofty peaks of the Andes and the Antarctic Peninsula.

Dear fellow Adventurer,
I'm very happy to introduce the following cruises to The Antarctic Peninsula and South Shetland Islands. Our team specializes in The Antarctic Peninsula along with the whole length of the range of the mighty Andes Mountains of South America. We are able to cater for anybody who would like to put his or her energies and enthusiasm to exotic use. Whether you are a photographer, wildlife lover, cross-country skier, climber or someone who just wants to experience the most spectacular scenery in the world, we are able to accommodate you.
I'm proud to say that with all Antarctic Horizons programs, our priorities are first of all safety, followed by ecology and fun.